I was fortunate enough to be given the opportunity to review Nancy Swing's debut novel and thoroughly enjoyed it, but her second novel, Child's Play, is even better. It's an incredibly powerful story of despair and redemption, and an unlikely friendship that alters the two protagonists' lives. Well worth reading. 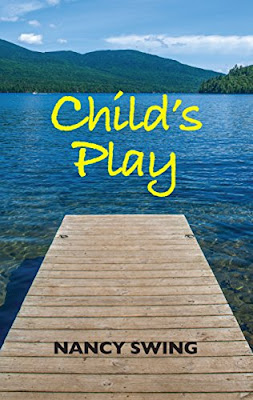 Eden Jones and Bethanne Swanson are no-account people, both in their own eyes and in the estimation of the residents of Lewiston, West Virginia, the small town in which they live.
Eden is thirteen and lives with her mother and baby brother on a trailer park. Since her father walked out on them, Eden has tried to help her mother to keep their small family afloat by babysitting her young brother every night during the school holidays so that her mother can do shift work at the mill and afford a baby-sitter and work when Eden is in school. Eden is plump and has little money and is teased by the other children at her school. The bullying would be much worse if it wasn’t for Ray-Jean Shackleford, who had befriended her. Ray-Jean was one of the toughest, most street-wise kids in the town, a girl who seemed afraid of nothing and broke into wealthy people’s houses to snoop and sometimes to steal. Eden is a naïve but clever young girl and, despite the sparseness of her opportunities, is interested in learning, usually from the education channels on television. She regards Ray-Jean as an adventurer, a person much braver than herself, and never questions whether what she does is wrong.
Bethanne is fifty, out-of-shape and dogged by her addiction to cigarettes and alcohol. Her life is a mess, mainly because of her habit of choosing predatory bullying men to live with. These men have physically and emotionally abused her and left her destitute. Bethanne is living in the house of her sister, Mary Margaret, an elegant, sophisticated woman who is married to Winston Gravesly, a wealthy, prominent, West Virginia lawyer. Mary Margaret has two grown up children, Lucinda and Clay. Lucinda has always been hostile towards Bethanne but Clay is still her friend. Bethanne is aware that the blackmail she used to force her sister to take her in was wrong but she is too desperate and damaged to truly regret it.
The story opens at the point where Ray-Jean and Mary Margaret have just died. They were together in Mary Margaret’s car, which drove into the lake at the Gravesley’s summer house. Winston Gravesly used his influence to have the deaths ruled as a tragic accident but any explanations as to why Mary Margaret would have been transporting Ray-Jean in her car are unconvincing. Both Eden and Bethanne are convinced that there is something deeply suspicious about the deaths and set out to discover the truth. At first they work separately but soon they become aware of each other’s presence and join forces, cautiously, not trusting one another, until suddenly they discover an affection for each other and a respect that surprises them both. However their investigation comes to the attention of some powerful people who have dark secrets to hide and Eden and Bethanne realise that their own lives are at risk.
Child’s Play is Nancy Swings' second crime novel but the first set in Lewiston, West Virginia. It is a compelling novel of American, small town society and a fascinating study of the damage dark secrets can do to an individual, a family and a community. At the same time, there is a lot of gentle humour in the book, and two unusual but thoroughly engaging protagonists in Eden and Bethanne. This is not only an excellent crime novel but also a story of redemption as Eden discovers her potential and Bethanne rediscovers her self-respect. The book has dark themes sensitively handled but one of its chief delights is the developing relationship between the two unlikely friends. Child’s Play is an excellent read and one which I would recommend.