Murder & Mystery in the Ancient World: reviews of Danger in the Wind & The Marathon Conspiracy 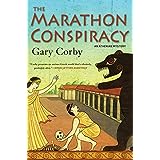 Writing historical crime fiction has many challenges, as I know from writing Victorian Murder Mysteries. The challenges of writing crime set in the Ancient World must be even greater. To do the vast amount of research required and have a mastery of ancient texts is daunting enough, but this research has to be incorporated seamlessly into the narrative: lifestyle, geography, history, politics, all have to form the background without the reader ever thinking 'oh no, here comes another dreary info dump.'
Having accomplished this, there is the problem of making the attitudes of the past accessible and acceptable. In the Ancient World, one of the main sticking points is slavery. The only way to make your Roman or Greek protagonist credible is for them to accept the attitudes and culture of the time, although in deference to modern sensibilities, the hero or heroine always treat their slaves well. (In Rosemary Rowe's case her hero is actually a freed slave.)
I enjoy the lighter historical crime fiction, such as that delivered by Lindsey Davies, Rosemary Rowe and Jane Finnis. I was delighted to discover a series that was new to me, set in Athens, at the time when democracy was a new concept, and immediately put Gary Corby's Nicolaos series on my 'buy and read list.'

I have included two of the most recent book reviews that I have done for books by Corby and Finnis, although I would urge new readers to start at the beginning of the series.

As far as I know, Jane Finnis was the first author to create a female Roman detective. Finnis chose to set her Aurelia Marcella series in Roman Britain, in Finnis' native Yorkshire, far distant from the political hub of Rome and this sense of being in an outpost adds to the sense of danger.. Aurelia is an innkeeper, running a mansio for travellers, although because she is a woman, the deeds are in the name of her twin brother, Lucius. He is a Government Investigator, as is Aurelia's lover, Quintus, and between them they manage to involve Aurelia in many dangerous plots; not that Aurelia needs any help to find danger, she is very skilled at finding murder and mayhem for herself.

It is 100 AD and Britannia seems to be settling down under Roman rule.  Aurelia Marcella, innkeeper of the Oak Tree Mansio, situated not far from York, is more concerned with domestic matters than political.  Her twin brother, Lucius has returned from the south, bringing with him the girl he intends to marry.  Vitellia is beautiful, rich and sweet-natured but Aurelia thinks she lacks the intelligence and force of character to make her brother a good wife.  To add to Aurelia's troubles her cousin Jovina invites her to visit her for her birthday party, a pleasant social invitation, except the last paragraph begs Aurelia to come and help her because 'there is danger in the wind.'  Jovina and her soldier husband are stationed in Isurium, an undistinguished fort further north and Aurelia has not seen her for some years.  On the same day a traveller is brutally murdered while staying at Aurelia's mansio and he proves to be a soldier, also stationed at Isurium.
Lucius is an investigator for the Emperor and he discovers that Eurytus, the Emperor's tax collector and the most hated man in Britannia, is also due to visit Isurium and there are threats of native uprising in the area.  Lucius, as Head of the Family, forbids Aurelia to go to Isurium.  He should have known better.  Aurelia is not a woman who would allow anyone to dictate to her in such matters and she heads straight up north to Jovina's aid.
Events in Isurium escalate alarmingly and Aurelia finds herself in a web of passion, greed, jealousy and political intrigue, which swiftly leads to violence and family tragedy.  As Aurelia struggles to prove the innocence of a kinsman accused of murder and to prevent native unrest erupting into a full-scale rebellion, she is grateful for the help of her brother Lucius and Vitellia, who proves not to be as lacking in spirit as Aurelia feared.  Above all, Aurelia is glad of the presence of her lover, Quintus Antonius Delfinus, a senior Imperial investigator, with whom Aurelia has shared many adventures.
Danger In The Wind is the fourth book featuring Aurelia Marcella and, as a series it gets better all the time.  The honest, witty and direct voice of Aurelia recounting the story; the warm (and at times mischievous) characterisation; the historical detail, which transports the reader to that time and places without ever becoming intrusive and the fast-paced who-dunnit style of the Aurelia books make them all page-turners.  I  read Danger In The Wind in less than two days.

As soon as I read the first lines of Gary Corby's The Marathon Conspiracy I was hooked. I love the ingenious way he weaves historical characters and fictional characters into a funny and gripping narrative. Corby's next Nicolaos and Diotima book Death Ex Machina has just been published and I am looking forward to reading it.

Nicolaos wants to take time off from investigating and concentrate on the preparations for his wedding to Diotima, his partner in investigation. Life is tricky enough with both sets of parents set on their own agenda and bickering to get the wedding celebrations run their way, without Nico's boss, the great Athenian statesman, Pericles, sending for him to investigate a somewhat unusual situation. 'Pericles didn't usually keep a human skull on his desk, but there was one there now. The skull lay upon a battered old scroll case and stared at me with a vacant expression, as if it were bored by the whole process of being dead. I stood mute, determined not to mention the skull. Pericles had a taste for theatrics, and I saw no reason to pander to it.'
The skull belongs to Hippias, the last tyrant to rule Athens. The Athenians had fought the great Battle of Marathon to get rid of the hated tyrant and thought he had died in Persia. What are his remains doing outside the city walls, discovered by two girls who attend the Sanctuary of Artemis, the Ancient World's most famous school for girls? The political fall-out of who amongst the Athenians now in power might have been a traitor and secret supporter of Hippias causes danger and unrest. One of the girls who discovered the skull is killed and the other disappears. When Nico and Diotima go to the Sanctuary of Artemis to investigate they realise that somebody is willing to kill them to prevent them discovering the truth. It is a race against time for Nico and Diotima to solve the historical mystery, the present day killing and abduction, unmask the Athenian traitor, not to mention managing to attend their own wedding.
This book is great fun. It is the fourth in the series but, from the first page, it is totally accessible even for those who have not read the earlier Nico and Diotima novels. Although it is very funny and moves at a great pace, it never makes the mistake of trivialising the murder of the young girl and the scenes with her distraught mother are beautifully handled. I wholeheartedly recommend this book and intend to read the others in the series.