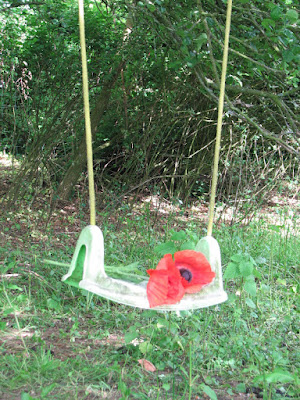 Posted by Carol Westron at 20:06 No comments:

In the early 1970s I was studying at Bristol University and my degree was in theology. I enjoyed reading Christie and Sayers and the other well known authors of the Golden Age, but it seems strange to me that I was aware of Knox as a theologian decades before I realised he wrote detective stories. As part of my preparation for the Bath Spa Crime Fiction Conference, I wrote this article about Knox, first published in Mystery People.

The Body in the Silo
by Ronald Knox
The book opens with a lively exchange of views between Miles Bredon and his wife, Angela, regarding whether they should go and visit some acquaintances on the Welsh border.
'”It's no use,” said Miles Bredon. “The man's a bore and the woman's a pest, and if I did ever say I'd go there I must have been drunk at the time. Let us leave it at that.”... “You were, rather, as far as I can remember,” admitted Angela. “I can't always wait until you come round. The pity is that I didn't give you an extra glass to lay you out, put you straight in the car, and decant you at the Hallifords' there and then. A sensible wife would always cart her husband about the country in a sack.”'
Angela has her way and they go off on their visit. Lost in country lanes they are advised by villagers to look for the silo, a formidable landmark, '”Like as it might be a church tower.”' Following this advice they come upon 'a large building made like a lighthouse, forty feet high, with no windows, except a skylight in its conical top, no door, and indeed no opening at all except on one side, where a series of square hatches, one above another, led right up to the roof.' Their host, Mr Halliford, is playing at being a farmer and the silo is his favourite toy. The vast building is filled with grass and hay, which ferments and provides food for the cattle in winter. It can be a dangerous place, as the fermenting grass gives off carbon gases, and being trapped inside the silo can be fatal.
The entertainment is as dire as Bredon fears. Previously having made herself and her guests loathed throughout the countryside with scavenger hunts, Mrs Halliford is determined to hold an eloping hunt, where an 'eloping' couple are pursued in cars through the countryside and towns. In order to maintain authenticity, she insists that this has to be at night. This programme is put into action and, in an atmosphere of artificially created excitement, the hunt takes place. The pursuers travel either as married couples or singly, and one non-driver elects to stay at home. This means that nobody has an independent alibi when, the next morning, a body is discovered in the silo, having died of carbon gas poisoning.
The Coroner brings in a verdict of Accidental Death but Bredon has grave doubts about its validity. These are strengthened when his friend, Inspector Leyland of Scotland Yard turns up and is keeping covert surveillance on the Halliford household. Despite his objection to investigating a family with whom he is staying as a guest, Bredon cannot resist a mystery and is soon on the trail of clues, many of which were laid deliberately to mislead.
The Body in the Silo is a whodunnit, with few clues in the characters of the suspects but all the physical clues are meticulously offered to the reader so that they can try to solve the puzzle for themselves. The problem in intriguing and the interaction between Miles and Angela Bredon is warm and amusing. It is an interesting read for lovers of classic Golden Age crime fiction.