There are many books that I admire but not many that I think 'that's an absolutely incredible piece of writing!'. Alison Morton is an author whose knowledge of history, politics and military tactics I stand in awe of, and, more important, her skilled use of her knowledge in her alternative history novels. I reviewed Aurelia when it was first published and this seems an excellent time to post this review on my blog. There are two reasons for this decision. The main one is that Alison's third book featuring Aurelia Mitela, Retalio, is published at the end of this month. The other is that Alison recommended me to reinstate my blog and I promised that I'd do it on April Fool's Day - it seemed appropriate. 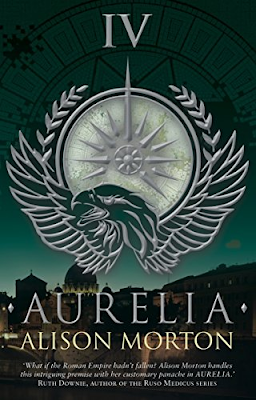 Aurelia is an alternate history thriller, which is based on the idea that the Roman Empire did not fall and survived into the 20th Century as Roma Nova, a prosperous and influential colony that still maintains many of the traditions and belief structures of Ancient Rome. Because Roma Nova never fell under the paternalistic influences that shaped their neighbours, women have great power and careers that often excel their men. The book is set in the late 1960s, a time when, in most of Roma Nova's neighbouring countries, men had the powerful positions and women were expected to be their secretaries.
Aurelia Mitela is the daughter of Felicia Mitela, head of one of the most powerful houses in Roma Nova. Aurelia has a daughter, Marina, a much-loved, frail child, and Felicia puts pressure on Aurelia to bear more heirs to ensure the succession. However, Aurelia has no desire to abandon her life as a career soldier, which in Roma Novan terms means being an officer in the Praetorian Guards. She certainly has no intention of having any sort of relationship with her mother's choice of suitor, Caius Tellus, a man that most people find charming but whom Aurelia has loathed and despised since childhood.
When Aurelia's mother dies, after being injured in a suspicious hit-and-run car accident, Aurelia has to give up her career in the Praetorian Guards and run her family. However, her special blend of skills are needed to help her country. Somebody is smuggling large amounts of silver, which is Roma Nova's chief means of revenue, and this is threatening the country's livelihood. Aurelia is sent as a Special Delegate to Berlin to investigate, and steps straight into intrigue and danger, which finds her at risk of losing her life, reputation and liberty. Even a brief interlude of pleasure with the mysterious Miklos endangers her, when she is accused of murder and is unable to account for her whereabouts.
Aurelia knows that the person behind both the smuggling and her own danger is her old enemy and  pursues him back to Roma Nova. Soon is is unclear who is the hunter and who is the prey, until a final showdown endangers not just Aurelia's life but that of her beloved daughter.
Aurelia is the fourth book set in Roma Nova but the first featuring Aurelia Mitela. Insurrectio, the second book featuring Aurelia, (Book Five in the Roma Nova series) is soon to be published and is another book to be added to my 'must read' list.
Aurelia is the first alternate history book that I have read and I was uncertain what to expect but within the first two pages I was hooked. The author handles the new slant on history and society with outstanding skill, making the situation clear without over-explaining. Her description of attitudes to women in the 1960s was accurate and full of wry humour. Aurelia is a strong but likeable protagonist: a courageous, clever, determined woman, vulnerable only in her love for her child. This book is a page-turner and I wholeheartedly recommend it.