I have had the good fortune to review all three of Alison Morton's books featuring Aurelia Mitela and Retalio is a magnificent conclusion to a superb trilogy. 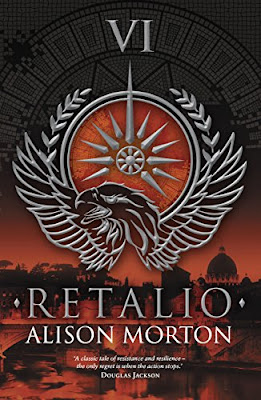 Retalio is the latest in Alison Morton’s alternative history novels, based on the premise that the Roman Empire never totally disappeared but continued as a small but prosperous and influential country called Roma Nova. The country is ruled by twelve houses, all of which are led by women, and adheres to the traditions of a proud and stoical past.
Retalio is set in the 1980s. It is the sixth in the series about Roma Nova and the third in the trilogy that features Aurelia Mitela, head of one of the most powerful houses in Roma Nova. For many years Aurelia has countered the evil deeds of Caius Tellus, a Roma Novan nobleman, who is unscrupulous in his pursuit of power and determined to revenge himself on Aurelia for thwarting his criminal enterprises. A weak Empress has allowed Caius to overthrow the legitimate government, and he has taken power, murdering or sending to labour camps all who stood in his way or offended him and relegating women to staying at home or working in menial jobs.
At the start of this book, Aurelia has managed to escape from Caius and was smuggled out of Roma Nova but she was badly wounded and takes some time to recover. Even living quietly in Vienna with her partner, Miklos, her life is in danger from Caius’ hired assassins. A small number of Roma Novan refugees are scraping a living in Vienna but Caius’ evil manipulations have polluted Aurelia’s reputation and they shun her. Aurelia knows that she must regain their trust and her old position as a leader of the Roma Novan community if she is to have any chance of defeating Caius, bringing the new, young Empress to power and restoring order and prosperity to the country she loves.
Retalio is a stunning book, fast moving and yet detailed. The alternative history scenario that Alison Morton creates is totally convincing and terrifyingly plausible in the light of political events in the past and present. Her knowledge of politics and military strategy is awe-inspiring and yet is displayed with a light touch. Aurelia is a superb heroine. A soldier and a diplomat, she is powerful and yet compassionate, strong and yet vulnerable. She loves her family and Miklos and is loved in return, but true to her Roman upbringing, her deepest loyalty is to her country and she is willing to sacrifice her own happiness for its well-being.
Retalio is a page-turner and I recommend it wholeheartedly. However, if possible, I would also recommend the whole experience by reading the first two books in the trilogy, Aurelia and Insurrectio first.