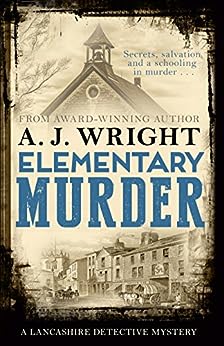 I enjoy historical fiction and have a special interest in crime novels set in Victorian times. This book is excellent. It feels authentic and it's centred around ordinary, working class people. Not an easy read but a compelling one.

Elementary Murder is set in 1894 and centres around George Street Elementary School, a school in one of the poorer, manufacturing districts of Wigan. Many of the pupils and their parents resent that the children are obliged to stay in school until they are twelve, rather than going out to work to augment the family income. The headmaster, Richard Weston, is a harsh disciplinarian and when Dorothea Gadsworth, a young woman who is being interviewed for a teaching post, faints in the staffroom, he informs her that she is unfit for the position and is rejected. Nothing more is heard of Dorothea over the weekend but, on the Monday following this unsuccessful interview, Dorothea is found dead in a classroom of the school. She has drunk poison and beside her lies a note with the single word, ‘Failed.’ At first it seems that the officials in charge will accept that Dorothea committed suicide, but Detective Sergeant Michael Brennan is not convinced that Dorothea died by her own hand, and, as he pursues his investigation, another death connected with the school confirms this.
As Brennan struggles to unravel the circumstances surrounding Dorothea’s strange and cruel death it becomes clear that her murder has its roots in a tragic accident fifteen years earlier when Dorothea was a child. As more assaults and attempted murders occur, it is discovered that a pupil at the school has gone missing and has not been seen since the Friday of Dorothea’s death. Brennan is under increasing pressure to discover the truth that links the past and the present before the killer strikes again.
Elementary Murder is a fascinating book, showing the harsh realities of life in an industrial town during the late Victorian period, and the impoverished, hand-to-mouth lives of the people who live and work there. It describes a culture in which violence is a commonplace occurrence and most working people place no value on education and have no faith in the authorities. Michael Brennan is a thoroughly likeable protagonist, honest, hard-working and devoted to his wife and young son. Throughout the book the characterisation is excellent, the plot is clever and intricately interwoven and the period detail is superb.
I would describe Elementary Murder as a page-turner and thoroughly recommend it.