This is my review of the second book in Alison Morton's stunning trilogy. 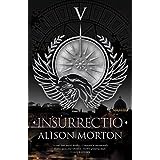 The premise behind these books is one of alternative history where the Roman Empire survived as an influential colony. Unlike the surrounding countries, Roma Nova has never fallen under patriarchal rule and is governed by female heads of the foremost houses who advise the over-all ruler, the Imperatrix. The first book featuring Aurelia Mitela is set in the 1960s. Aurelia is a young woman who loves her career as a Praetorian officer but she has to leave the army when her mother, the Head of the Mitela family, falls ill and dies. However Aurelia is called upon to serve her country by investigating the silver smuggling ring that is severely damaging Roma Nova's finances and political standing. At great danger to herself and her young daughter, Aurelia succeeds in defeating the man behind the smuggling. Caius Tellus is a member of another of Roma Nova's ruling families, a charming but vicious psychopath, whom Aurelia has hated and feared since childhood.
Insurrectio opens thirteen years after the conclusion of the story told in the first book. Aurelia is now Assistant Foreign Minister, continually striving to keep her promise to the last Imperatrix and guide and protect her daughter, the weak and foolish Imperatrix Severina, a woman swayed by flattery and persuasion, who resents the powers that her late mother had begged Aurelia to accept and will always act upon the last advice given to her rather than wise and proven counsel. Aurelia's worst fears become reality when Caius Tellus is released from prison, having served his sentence. Soon he manipulates and charms his way into a position of power and, with the terrible speed and unrelenting force of a land-slide, order breaks down in Roma Nova. In one of the first serious mob rampages Aurelia's daughter, Marina, is viciously attacked and Aurelia knows she has been targeted by Caius. Soon the traditional but stable and fair government of Roma Nova is under attack from all sides, and Aurelia is in danger of losing all she cares about: her daughter, her lover, her reputation and her life, and, above all, she fears the destruction of the country that she loves and has pledged herself to defend.
Insurrectio is an exceptionally powerful book. Aurelia is a strong, honourable and engaging character and the desperation of her struggle to save her family and her country is intensely moving. The book is also a fascinating and chilling study of the balance of political power and how a weak ruler and a ruthless would-be dictator, with the backing of mob-rule, can destroy a civilised country.
I would advise readers to read Aurelia first but to then go straight on to Insurrectio. It is a page-turner and I recommend it.