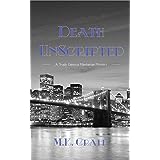 One of the great things about being a reviewer is the brilliant books you get to read. Another even better thing is the lovely people you get to meet, either on-line or in person. I've enjoyed chatting to Marni Graff for some time and I enjoy all of her books. Death Unscripted is really special, set in a New York film studio, it is warm, funny and has a wonderful protagonist. P.D. James encouraged Marni to write this book: just another thing we have to thank that wonderful lady for.

Trudy Genova thinks that she has the best job possible: a qualified nurse, she is the medical consultant at a movie studio. Instead of having to deal with human suffering and bodily fluids, she gets to teach actors how to mimic credible heart-attacks and supervise the medical details in scripts. The only down-sides of her job are occasionally having to chaperone precocious child actors and, far worse, having to fend off the sleazy advances of Griff Kennedy, the male star of the soap Thornfield Place. It is unfortunate that soon after Trudy fends off Griff’s groping with conspicuous success in the form of a well-aimed slice of coconut pie, the amorous actor should die, on-set, in suspicious circumstances. It is even worse that his last conscious action should be to point at Trudy and utter an accusatory, “You – YOU!”
Rumours and gossip are soon flying round the movie studio and Trudy is certain that people are eyeing her with suspicion. A visit from Detectives Ned O’Malley and Tony Borelli makes her feel both angry and threatened and she is determined to get to the truth. Trudy enlists the help of her best friend, Meg Pitman, who also works at the studio, and the pair of them delve amongst the complicated tangle of relationships amongst the actors and crew in an attempt to find out who was responsible for Griff’s death. Trudy’s sleuthing attempts soon cause her to fall foul of Ned O’Malley, and she has the hideous experience of being taken in for questioning. However she does her best to be useful to O’Malley and, after a while, he feels torn between regarding Trudy as a suspect and fearing for her safety if her attempts to unmask the killer make the murderer regard her as a threat.
Another actor dies a violent death. As O’Malley feared, the murderer has not finished, and it soon becomes clear that Trudy’s life is in imminent danger.
This is the first book in the Trudy Genova series and I hope that the following books will follow very soon. Trudy is a delightful protagonist, funny, warm, good-hearted and efficient but also sensitive, with things in her background that make her vulnerable. The plot is well thought out and convincing, and all the characters are well-drawn – real people not just caricatures – and I lost my heart to Trudy’s cat, Wilkie. The movie studio setting is fascinating and clearly authentic and I was not surprised to discover that the author had worked in a similar job. I particularly liked the technique Trudy invented to tell an actor playing a corpse when he needed to hold his breath.
I read this book in two days. It is a page-turner and great fun and I recommend it.